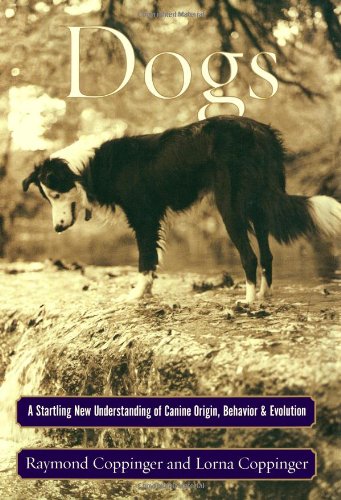 Too often books about pet species are larded with anthropomorphic sentimentality. Not so the current offering by Raymond () and Lorna Coppinger (). This is a literate scientific treatise that has much to offer dog owners and readers with a general interest in animals. With 35 years of experience breeding different types of dogs, and a strong background in biology, this couple offers new insights into dog behavior and evolution. Contrary to the current evolutionary theory that dogs are the same species as wolves, the authors postulate a common (archaic) ancestor for domestic dogs and wolves. Building on the work of earlier ethologists, they assert that modern dogs and modern wolves are as distinct from each other as modern humans are from modern apes. Accordingly, they contend that the idea of using wolf pack protocols to alter the behavior of dogs—as prescribed by some popular manuals—is absurd. Additionally, the authors note that because of selective breeding for patterns of behavior, some dog breeds are unsuitable as pets (e.g., sled dogs such as huskies, hunting breeds such as bloodhounds). In the managed evolution of dogs, which has produced a remarkable range of working and hunting breeds, the writers perceive both environmental and genetic factors. Through these new perceptions regarding the mechanics and tenacity of inbred and enhanced behavioral traits, humans can better understand the primal biological motivations of their canine companions. Chock full of both scientific studies and personal experiences, this fast-paced, absorbing book deserves a wide audience. Photos and charts.